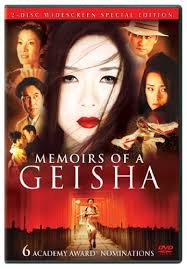 The Memoirs of a Geisha follows the life of a young Japanese girl, named Chiyo, who is sold to a Geisha house by her father after the death of her mother. The story takes place in Kyoto which was home to one of the largest geisha districts in all of Japan. Chiyo struggles immensely in her new home and tries to escape repeatedly. However, after meeting a man named the Chairman she begins to envy the lives of geisha and decides that she must make the most out of her situation and changes her outlook on life. Instead of battling against her fate, Chiyo begins to work hard towards becoming a geisha. She works incredibly hard to master dance, pour tea and apply makeup and entertains some of the most high class men such as the Chairman and a man named Nobu who is immediately infatuated with her. Soon after, Chiyo becomes an elegant Geisha renamed Sayuri. Sayuri becomes one of the highest class geisha’s in Japan, however, this all changes when World War Two begins and Sayuri must leave her extravagant lifestyle behind and move to a safer area. After the Second World War, Japan is not the same and Sayuri struggles to adjust. She undergoes an internal conflict of whether she should pursue the Chairman or accept to become the mistress of her friend, Nobu. Sayuri struggles immensely as she cannot decide whether she should take a risk or continue to do what everyone expects of her.

Why I recommend this book:

This book is one of the most capturing novels I have ever read. The character, Sayuri, is extremely relatable and makes the reader feel a plethora of emotions. Even though some of the decisions Sayuri makes are weak-willed, she is still a very heroic and powerful character. Sayuri’s outlook in the novel portrays how Japan was an extremely male-dominated society at the time. The novel was very powerful as the painful past behind the glamourous Geisha as revealed and brought to light. Although this was a fictional book, it told a realistic and original story which is why it was such an amazing read.

Difficulty: Heavy – The novel is easy to understand but contains some mature content which may be hard to read for some people.